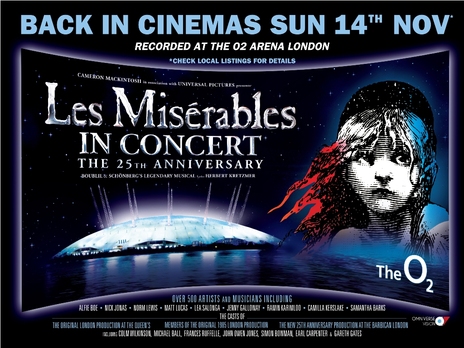 The show was recorded live at the beginning of October as part of our satellite broadcast from its sold out 25th Anniversary Concert at The 02 Arena. Back by popular demand the screenings will be a chance for fans that missed out the first time to experience the live recording of the show on the big screen. The magnificent score of LES MISERABLES includes the songs, ?I Dreamed a Dream?, ?On My Own?, ?Stars?, ?Bring Him Home?, ?Do You Hear the People Sing??, ?One Day More?, ?Empty Chairs at Empty Tables?, ?Master Of The House? and many more. Performance includes a 10 minute Interval. HISTORY ?LES MISERABLES? originally opened in London at the Barbican Theatre on 8 October 1985, transferred to the Palace Theatre on 4 December 1985 and moved to its current home at the Queen?s Theatre on 3 April 2004 where it continues to play to packed houses. When ?LES MISERABLES? celebrated its 21st London birthday on 8 October 2006, it became the World?s Longest Running Musical. In January 2010, the West End production broke another record by celebrating an historic 10,000th performances. Seen by over 56 million people worldwide in 42 countries and in 21 languages. ?LES MISERABLES? is undisputedly one of the world?s most popular musicals ever written.