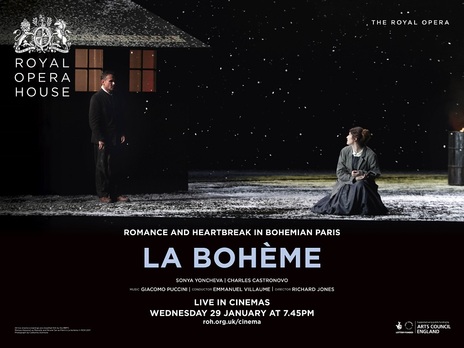 Puccini’s opera of young love in 19th-century Paris is packed with beautiful music, including lyrical arias, celebratory choruses for Act II’s evocation of Christmas Eve in the Latin Quarter and a poignant final scene over which the composer himself wept. Richard Jones’s character-led production perfectly captures La bohème’s mixture of comedy, romance and tragedy, with striking designs by Stewart Laing. The cast features some of the greatest interpreters of Puccini’s bohemian lovers performing today, as well as former members of The Royal Opera’s Jette Parker Young Artists Programme.

Sung in Italian with English subtitles

150 mins, Rating: 12A As Live
BBFC Consumer Advice: Rating & Running Time TBC. This as live certificate has been provided for cinema exhibition on the basis of information provided by the distributor and without the material being viewed prior to exhibition.