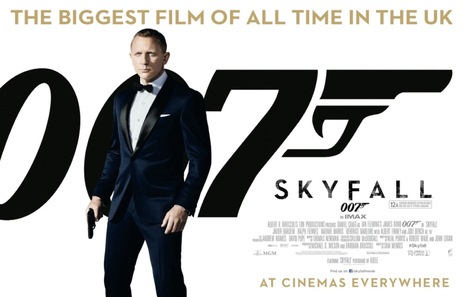 BBFC Consumer Advice:Contains moderate action violence and one use of strong language.

James Bond is back, but his loyalty is tested as M's past comes back to haunt her. This year marks the 50th anniversary since the infamous spy franchise first started and the producers of the latest Bond film have pulled out all the stops. For the first time in the series' history, a James Bond film is being directed by an Academy Award winner in the form of Sam Mendes, who won the award for American Beauty in Mendes has bought with him a wealth of talent - in fact, the impressive cast and crew of technical experts have 35 Academy Award nominations and five wins between them. It is no wonder that this is rumoured to be the biggest Bond ever. Filmed all over the world including Turkey and China, 'Skyfall' sees MI6 come under attack and Bond (Daniel Craig) dispatched to track down and destroy the threat - no matter how great the personal cost. The stellar cast also includes Javier Bardem as the villainous Silva who, after his scene-stealing performance in 'No Country For Old Men', will be more than a match for Craig's Bond.