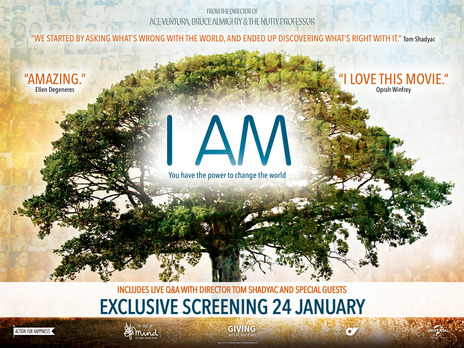 The critically acclaimed and highly entertaining I Am tells the captivating tale of Director Tom Shadyacs (Ace Ventura: Pet Detective, Patch Adams, The Nutty Professor and Bruce Almighty) pursuit for truth and mortal significance after a bike accident left him with Post Concussion Syndrome. Destabilised by the effects of the accident and having stared death in the face, Shadyac begins to question what is wrong with the world and what we can do about it. Shadyacs mesmerising documentary is a thought-proviking mix of interviews, animations and clips, featuring remarkable interviewees from the realms of science, philosophy and faith, including Archbishop Desmond Tutu, the Dalai Lama, Noam Chomsky, and Coleman Barks, all of whom help sow the films fabric, along with a thought provoking mix of animation, beautiful cinematography and clips. Following the film, there will be a live discussion at the Empire with the director Tom Shadyac, comedian Tony Hawks and a respected panel, transmitted live to cinemas across the UK and Europe. Each speaker will be asked to define what they believe we can do to make the world a better place. The discussion will be followed by an interactive Q&A from those watching in London and the wider audiences watching via satellite. I Am is a must-see event that instils a positive sense that change can be accomplished by acts on everyday individual levels. Digging deeper than the surface, this unique event will aim to magnify the Earths true problems, and take the audience on a journey of discovery and the realisation that we all have the power to change the world.