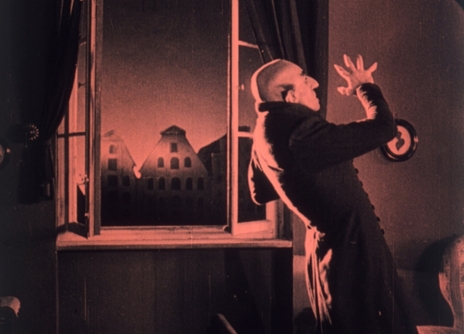 Few films have had a more profound and lasting impact on the horror genre than Murnau’s prime example of German Expressionism, directed with determination to evoke unsettling chills with a strong visual appeal. This unofficial adaptation of Bram Stoker’s ‘Dracula’ – the reason why it was originally shown in butchered form due to Stoker’s widow taking legal action - features symphonic lighting, rhythmic editing and horror imagery that has been copied endlessly ever since. During the Bremen plague in 1838 estate agent Hutter is sent to the Carpathian Mountains to arrange a property sale for the mysterious Count Orlock (the magnificent Max Schreck). When Hutter falls under his blood-sucking master’s thrall, it’s left to his wife Ellen to banish the evil creature back to the hell he came from. The most celebrated sequence - Orlock climbing stairs to Ellen’s boudoir, his menacing outline casting terrifying wall shadows
remains unparalleled in the horror hall of fame.