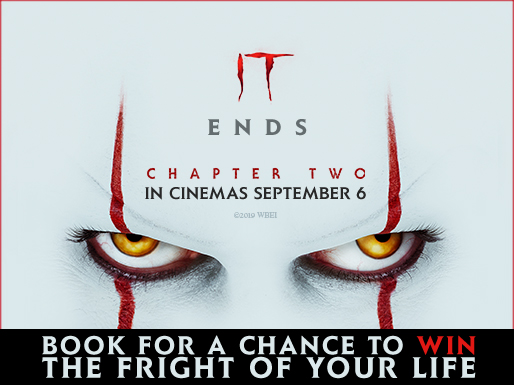 BOOK ONLINE FOR A CHANCE TO WIN A 3 NIGHT STAY FOR TWO IN ONE OF THREE HAUNTED CITIES! PRAGUE, ROME OR VENICE.

Evil resurfaces in Derry as director Andy Muschietti reunites the Losers Club young and adult in a return to where it all began with 'IT CHAPTER TWO'.

The film is Muschietti’s follow up to 2017’s critically acclaimed and massive worldwide  box office hit “IT,” which grossed over $700 million globally. Both redefining and transcending the genre, “IT” became part of the cultural zeitgeist as well as the highest grossing horror film of all time. Because every 27 years evil revisits the town of Derry, Maine, “IT CHAPTER TWO” brings the characters who’ve long since gone their separate ways back together as adults, nearly three decades after the
events of the first film.

Are you ready for the fright of your life?! Empire Cinemas & 'IT Chapter Two' offers one lucky winner (& Guest) a 3 Night stay in a  choice of three haunted cities! Prague, Rome or Venice.

• Explore the darker side of Prague, through narrow, cobbled streets and alleyways Hear tales of the macabre, murder and mayhem Delve beneath the ‘Old Town’ by lamplight and discover former dungeons and torture chambers, where angry victims reputedly still reside.

•Visit piazzas in Rome where heretics were slow roasted, the home of a dedicated executioner, and the building where the most notorious mass murderer in the city plied his trade Enter the ancient Roman catacombs, home to a chapel made entirely out of human bones, and watch out for a ghost carriage that crosses the Ponte Sisto.

•Venice is home to many paranormal legends and stories Explore empty squares, haunted alleys and hidden corners Learn of Biasio, the child killing medieval butcher of Venice, whose victims are said to haunt the city Visit an underground crypt at night, illuminated only by the light of a flickering candle.