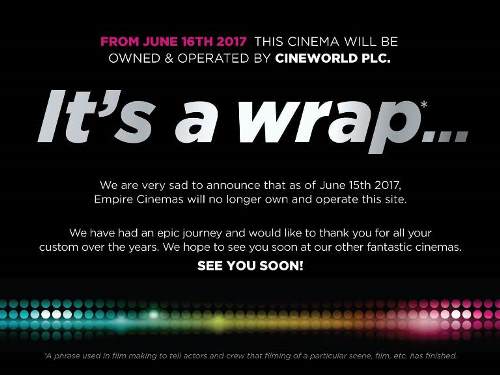 PLEASE NOTE From JUNE 16th 2017 EMPIRE CINEMAS at The Gate NEWCASTLE will be owned and operated by Cineworld.

CINEMA VOUCHERS
The following 'Empire Cinemas' vouchers will be accepted by Cineworld (at The Gate only) for a period of 3 months from the above acquisition date:

EMPIRE CINEMAS FILM CARD REFUNDS*
Empire Cinemas Film Cards will NOT be accepted at the above Cinema.
Customers with an active Film Card with a remaining balance of £5 or more can apply for a refund* by providing the following detail;

The above detail should be emailed to GiftCards@EmpireCinemas.co.uk.

*Refund requests to be received no later than 31st December 2017.

Once the Film Card has been verified and funds frozen, a credit for the remaining balance (in the form of a cheque) will be issued to the above named person at the postal address supplied within 10 working days.

Empire Cinemas would like to thank you for all your custom over the years and hope to see you soon at one of our other cinemas.