The World’s Most Immersive Movie Experience Comes to Leicester Square. 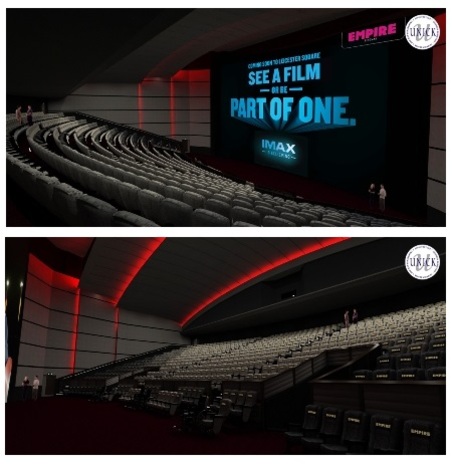 The Empire Leicester Square first opened its doors as a theatre in 1884, and from the earliest days of the moving image has been at the forefront of advances in cinema technology, where, in March 1896, Louis and Auguste Lumière presented the first theatrical performances of a projected film to a paying U.K. audience.

Justin Ribbons, CEO of Empire Cinemas, said: “We’re extremely excited to be adding an IMAX® theatre to our flagship location. The introduction of IMAX® further reinforces our commitment to providing the most cutting edge, immersive viewing experience to our customers and will reinforce The Empire Leicester Square’s position as the home of the UK’s best cinema-going experience for years to come.”

“IMAX has theatres in some of the world’s most iconic locations and we’re delighted to partner with Empire Cinemas to add the famous Empire Leicester Square to this celebrated list,” said Andrew Cripps, President, IMAX EMEA. “Today’s agreement underscores the momentum that continues to build for IMAX in Europe and the power of the IMAX brand as the premium entertainment option at the world’s most renowned locations.”

As part of the refurbishment, the space previously occupied by Screen 1 will allow Empire to develop a second auditorium in addition to the IMAX theatre, that will host a large format digital screen - providing fans a further opportunity to enjoy the latest releases in ultimate comfort. Building work has already commenced with the new screens expected to open early 2014. The Empire Leicester Square will remain open during the construction work, with the other seven auditoria continuing to screen the latest film releases.

Under the terms of the agreement, the new IMAX theatre at Empire Leicester Square will eventually transition to IMAX's next-generation laser digital projection system, which is expected to set a new benchmark as the industry’s premium entertainment experience. The system, which incorporates the laser digital intellectual property IMAX exclusively licensed from Eastman Kodak and Barco's unique laser innovations, represents the culmination of the largest R&D initiative in IMAX’s history and will enable IMAX’s largest screens to deliver the highest-quality digital content available with greater brightness and clarity, a wider color gamut and deeper blacks.

About Empire Cinemas
Empire Cinemas is the largest independently owned cinema chain in the UK. Currently operating 162 screens in 16 cinemas across the United Kingdom. Empire Cinemas screens everything from mainstream blockbusters to art-house classics in quality cinemas, staffed by individuals who are knowledgeable and enthusiastic about film.

In 2012, Empire Cinemas opened its doors to 7.6 million customers, showing over 500 different films across its estate.

Operating since 2005, Empire Cinemas takes its name from The Empire Leicester Square, the flagship location within the group which celebrates its 117th birthday this year, with the company drawing on a rich heritage of over a century of experience bringing moving pictures to the public.

About IMAX Corporation
IMAX, an innovator in entertainment technology, combines proprietary software, architecture and equipment to create experiences that take you beyond the edge of your seat to a world you’ve never imagined. Top filmmakers and studios are utilizing IMAX theatres to connect with audiences in extraordinary ways, and, as such, IMAX’s network is among the most important and successful theatrical distribution platforms for major event films around the globe.

IMAX is headquartered in New York, Toronto and Los Angeles, with offices in London, Tokyo, Shanghai and Beijing. As of June 30, 2013, there were 767 IMAX theatres (634 commercial multiplexes, 19 commercial destinations and 114 institutions) in 54 countries.

IMAX®, IMAX® 3D, IMAX DMR®, Experience It In IMAX®, An IMAX 3D Experience®, The IMAX Experience® and IMAX Is Believing® are trademarks of IMAX Corporation. More information about the Company can be found at www.imax.com. You may also connect with IMAX on Facebook (www.facebook.com/imax), Twitter (www.twitter.com/imax) and YouTube (www.youtube.com/imaxmovies).