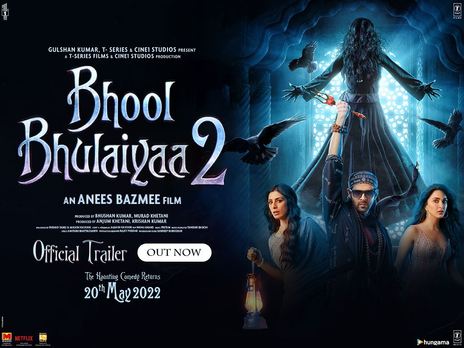 An accidental, yet destined meet up between two strangers Ruhaan and Reet forms into camaraderie. Ruhaan decides to break Reet’ shackles of fear and attend a music festival before she leaves for her hometown. Reet lies to her family about boarding a bus and meanwhile enjoys the festival with Ruhaan and then tries to catch the next bus back home. But fate has its own plans. They discover their bus has crashed and all the passengers are dead. The news does seem like a relief but Reet is devastated as she can’t tell her family the truth about being alive and lying earlier. But she still travels back with Ruhaan to see her grieving family. As they reach the haunted haveli left behind by the Thakur family many years ago because of Manjulika’s ghost, Ruhaan is confronted with Thakur Sahab’s gun pointed at him followed by an endless trail of questions while Reet hides away, Ruhaan comes with a ridiculous cover up by telling them that he has the power to talk to ghosts, and Reet brought him here to say a final goodbye to her family. Ruhaan starts to gain a certain popularity amongst the villagers as they start calling him Rooh baba which he enjoys. But the short lived fame has transformed into a problem which eventually grows to be uncontrollable. Ruhaan no more has to deal with fake ghosts, its Manjulika’s actual ghost that is out there and might even attack Reet. Now Ruhaan has to hide Reet from the family and save the family from Manjulika’s ghost!