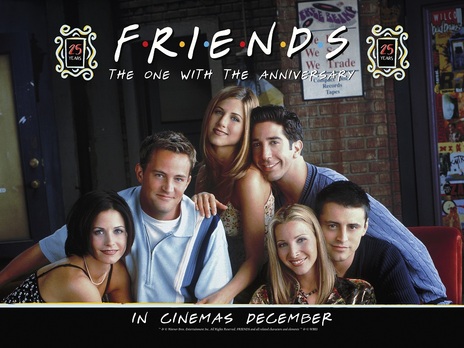 Friends 25th: The One With The Anniversary

From Warner Bros. Television, Friends, which debuted on September 22, 1994, follows the lives and loves of a close-knit group of friends living in New York City: siblings Ross (David Schwimmer) and Monica Geller (Courteney Cox), along with friends Chandler Bing (Matthew Perry), Phoebe Buffay (Lisa Kudrow), Joey Tribbiani (Matt LeBlanc) and Rachel Green (Jennifer Aniston). A favorite among critics and fans alike throughout its 10-season run, Friends not only won the Emmy®for Outstanding Comedy Series, but also garnered Emmy®Awards for series stars Jennifer Aniston and Lisa Kudrow.Friends was created by David Crane and Marta Kauffman, who executive produced the series with Kevin Bright through Bright/Kauffman/Crane Productions in association with Warner Bros. Television. A cultural phenomenon, Friends has built a legacy of devoted fans that has spanned over 25 years.