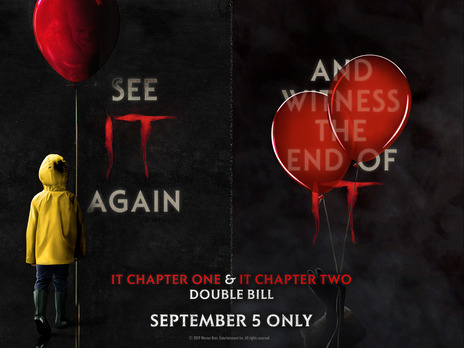 In the Town of Derry, the local kids are disappearing one by one, leaving behind bloody remains. In a place known as 'The Barrens', a group of seven kids are united by their horrifying and strange encounters with an evil clown and their determination to kill It.

After the terrifying events of 1989 where the Loser’s Club came up against the traumatising Pennywise (Bill Skarsgard), the members have gone their separate ways.

But 27 years later, an evil is once-again stirring in Derry, and each of Bill (James McAvoy), Ben (Jay Ryan), Beverly (Jessica Chastain), Richie (Bill Hader), Mike (Isaiah Mustafa), Eddie (James Ransone) and Stan (Andy Bean) must return to their childhood home to confront the terrible wickedness, destroying it once and for all.

WARNING FLASHING IMAGES / STROBE LIGHT WARNING ON 'IT CHAPTER TWO'.
All customers are advised that “IT CHAPTER TWO” contains one or more sequences of flashing lights, flickering lights or regular patterns which might affect customers who are susceptible to photosensitive epilepsy. Those who may be affected should take appropriate action.