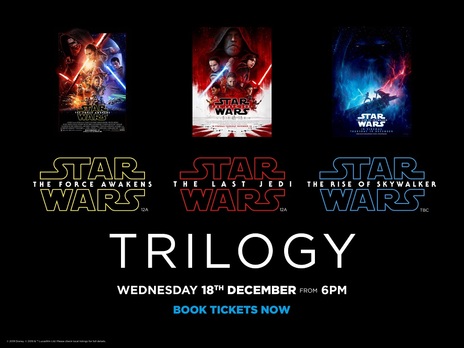 Star Wars: The Force Awakens
Thirty years after the death of the Emperor and the destruction of the second Death Star, there has been an awakening in the Force, leading Luke Skywalker, Han Solo and Princess Leia - along with a new generation of heroes - to fight the revived Dark Side.

Starkiller Base may have been destroyed, but the First Order are far from defeated and the war between them and the Resistance grows ever more fierce. The Resistance could really use a Jedi Knight on their side – but Skywalker has decided that it’s time for the Jedi to end.

Feel the Force once again in ‘Star Wars: The Last Jedi’, as heroes and villains old and new collide with the fate of the entire galaxy at stake.

Star Wars: The Rise Of Skywalker
The surviving Resistance faces the First Order once more as Rey, Finn and Poe Dameron's journey continues. With the power and knowledge of generations behind them, the final battle commences.