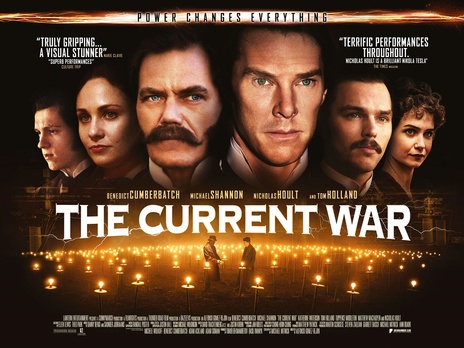 THE CURRENT WAR, starring Benedict Cumberbatch as the great American inventor Thomas Edison and Michael Shannon as his rival, revered entrepreneur, George Westinghouse, will be released in cinemas across the UK and Ireland on Friday 26 July. Fuelled by the intense rivalry between electricity titans Thomas Edison and George Westinghouse, THE CURRENT WAR tells the dramatic story of the late 19th century race to light up America and power the world. Rounding out the cast are Nicholas Hoult as the eccentric inventor Nikola Tesla, Katherine Waterston as Westinghouse's outspoken wife Marguerite, Tom Holland as Edison's confident young secretary Samuel Insull, Matthew Macfadyen as the famous financier and banker J.P. Morgan, and Tuppence Middleton as Edison's supportive wife Mary.