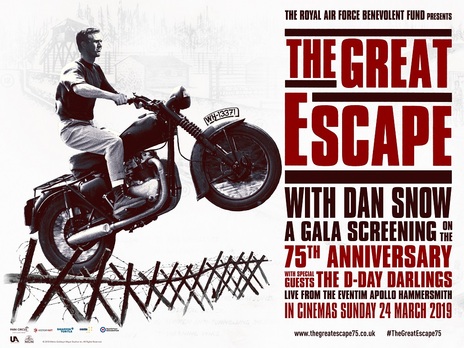 The Great Escape With Dan Snow: A Gala Screening On The 75th Anniversary

The 24th of March 2019 marks the 75th anniversary of the real-life POW escape during World War II at the Luftwaffe-run Stalag Luft III prison in then German-occupied Poland. In honour of this, Dan Snow hosts a commemorative evening at the Eventim Apollo in London. The event will be live broadcast as a pre-show across UK cinemas, followed by THE GREAT ESCAPE (1963).


John Sturges dramatisation of the true story of a group of British, American and Canadian POWs who successfully escaped from Stalag Luft III in Upper Silesia in March 1944 is arguably the best World War II adventure film ever made. A host of big-name stars meshes beautifully in this meticulous recreation of the legendary escape. Although this is a film about courage, Sturges wisely takes a low-key approach, leavened with humour, rather than allowing the cast to indulge in macho antics.