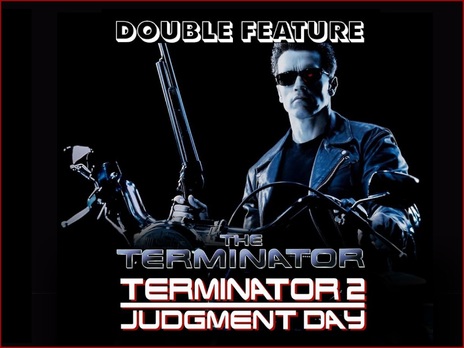 Judgement Day is coming, get your tickets to our special Terminator & Terminator 2 double bill on the 29th August and get a FREE* Terminator: Dark Fate poster, out in cinemas October 23rd.

THE TERMINATOR (1984 / 1h 47mins)
Disguised as a human, a cyborg assassin known as a Terminator (Arnold Schwarzenegger) travels from 2029 to 1984 to kill Sarah Connor (Linda Hamilton). Sent to protect Sarah is Kyle Reese (Michael Biehn), who divulges the coming of Skynet, an artificial intelligence system that will spark a nuclear holocaust. Sarah is targeted because Skynet knows that her unborn son will lead the fight against them. With the virtually unstoppable Terminator in hot pursuit, she and Kyle attempt to escape.

TERMINATOR II : JUDGMENT DAY (1991 / 2hrs 19mins)
In this sequel set eleven years after "The Terminator," young John Connor (Edward Furlong), the key to civilization's victory over a future robot uprising, is the target of the shape-shifting T-1000 (Robert Patrick), a Terminator sent from the future to kill him. Another Terminator, the revamped T-800 (Arnold Schwarzenegger), has been sent back to protect the boy. As John and his mother (Linda Hamilton) go on the run with the T-800, the boy forms an unexpected bond with the robot.